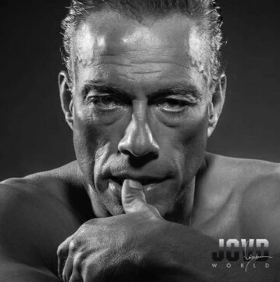 Van Damme was born in Berchem-Sainte-Agathe, Brussels, Belgium. “The Muscles from Brussels” started martial arts at the age of eleven. He won the European professional karate association’s middleweight championship as a teenager and also beat the 2nd best karate fighter in the world. His martial arts assets, highlighted by his ability to deliver a kick to an opponent’s head during a leaping 360-degree turn, and his good looks led to starring roles in higher budgeted movies like Cyborg (1989), Lionheart (1990), Double Impact (1991) and Universal Soldier (1992). In 1994, he scored with his big breakthrough $100 million worldwide hit Timecop (1994) and after a break from making movie he starred in Replicant (2001), Derailed (2002), and In Hell (2003).